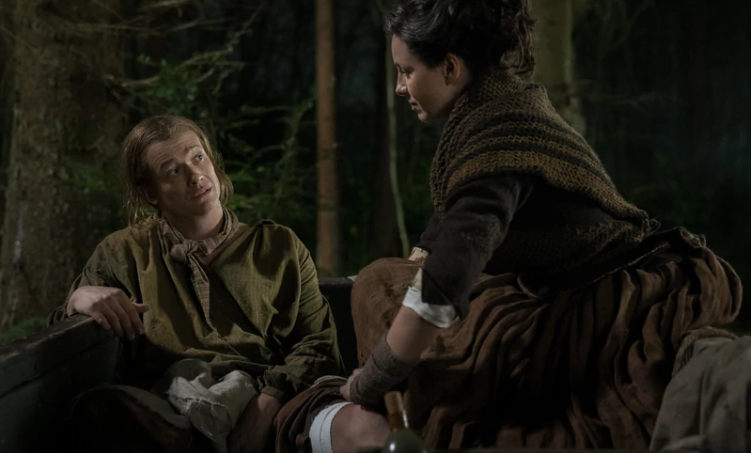 I saw this episode at New York Comic-Con and by episode’s end it had left everyone at Madison Square Garden with their mouths scraping the floor. Do you know why? Well, if you read the books, it is because of one man and that man is Stephen Bonnet.

It is 1767 in North Carolina and Jamie crosses paths with Stephen at a prison, where Jamie where he was going to see a friend to tell him that they were going to create a distraction in order for him to escape before he hanged. Well, Stephen took advantage of this plan which he overheard in the prison. He escaped and they crossed paths with him again after they buried their friend under the cover of night at the local church. Stupidly, because by now all the viewers know that there is something off with this Stephen Bonnet, they help Stephen escape. Stephen is like a bad penny.

Let’s get back to the Frasers, before I tell you of the notorious Stephen Bonnet.

The Frasers have planned to go back to Scotland and the only way to do so was to sell the ruby that Jamie and Claire have. When they attend a party at the Governor’s home, Jamie is told of a plot of land that was his for the taking via a land grant. All he has to do his give his oath of loyalty to the majesty.

Claire warns Jamie that the Revolutionary War is coming and that the Brits will lose. If he agrees to take the land that the Governor has offered to him, they will lose it. But, because his daughter was born in America, he wants to stay.

Fergus and Marsali are also wanting to stay and are thrilled to do so because they are with child.

On the way to visit Jamie’s Aunt, who lives as River Run, Jamie gifts Claire a medical kit, then his family is attacked by the murderer, pirate, and smuggler, Stephen Bonnet. He steals the wedding ring that Jamie gave to Claire, kills one of their friends, and pummel Jamie to within an inch of his life. This is a traumatic beginning to a new chapter in the lives of this beloved literary couple.

Yes, we all know that in the book Stephen stole Frank’s ring. But, would that have made as an emotional punch for Claire and Jamie. Also, Brianna will come across the ring and she knows how much her mother cherished that ring, Remember to never fear that the love that Jamie and Claire will have for one another trumps whatever outside forces that might tear their dream to settle down apart.

In the next episode, Claire and Jamie visit his Aunt Jocasta at her plantation, River Run. When tragedy strikes at the plantation, Jamie and Claire find themselves caught between what’s right and the law of the land.

This site uses Akismet to reduce spam. Learn how your comment data is processed.

August 8, 2018 – Crazy Rich Asians – Kevin Kwan’s best seller was turned into a fun, romantic, familial dramedy, that was filled with a lot of insight into what classist Asian families and Asian Society expects and demands of their offspring.

Following your hearts desire is not top of mind. Take over your parent’s businesses, be religious, be on Vogue, and marry for family’s sake is the key to surviving.

Actually, many of the theater goers in tonight’s showing were in full blown tears during some key scenes. So, it did strike a chord with many.

Back to the movie. It was the women that stole the movie.

From Rachel Chu’s resiliency, to Astrid’s fragility and resolve, to Eleanor’s protectiveness of her family, and to Peik Lin being the BFF we all need in our lives. They all showed us the expectations, sacrifices, challenges, and pitfalls of being in a well-to-do family.

Like any movie that revolves a girl and a boy who come up against adversity after adversity, you just end up cheering them on to the very end.

Should you watch it? Yes!

A great story and great acting make this a must see!

I will even buy it when it comes out for digital download!